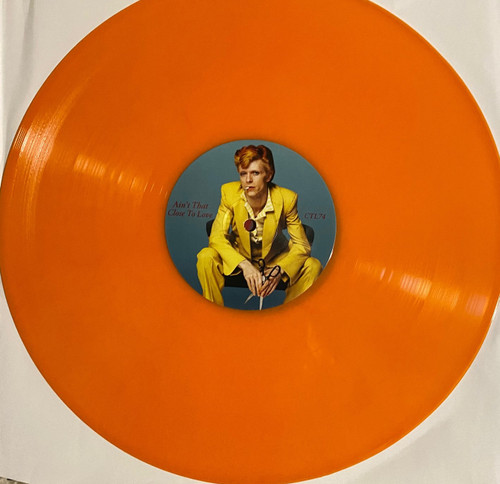 New import LP on orange vinyl.  See notes below for more details for this rare collection of alternate takes, demos along with promotional ad.

Great collectible for the Bowie fan.

The best of the Young Americans Sessions. All previously unreleased material.
* Recorded at Sigma Sound Studios, Philadelphia 8-23 August 1974
** Recorded at Electric Lady Studios, New York, January 1975
***These are incomplete versions from a very rare reel to reel tape. These are the only available versions of these takes. Recorded at Sigma Sound Studios, Philadelphia 13 August 1974
Note track B2 is just David's vocals, Lennon's guitar and Willy Week's bass
Limited edition of 150, also available in same numbers on red and blue wax
"Shilling The Rubes" = Circus/carnival slang for taking money off of people
Note that Bowie's pseudonym "The Gouster" is a now obscure piece of street slang regarding a form of dress that was adopted by hip black kids in the mid and late 1960s with the dress consisting of baggy, pleated pants and long collar shirts etc to create a "gangster" (cool not flashy) look, which ties in with Bowie's dress at the time.
×